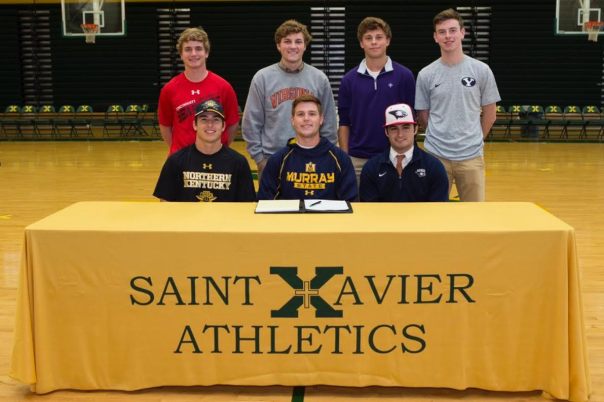 Earlier today, seven Tiger athletes made their college decisions official. The baseball, volleyball, golf, tennis, and swimming teams were all represented. These athletes have all made their mark in the St.X community, each winning a state championship in the past year. Your hard work, discipline, and work ethic have made St.X proud, and these colleges are extremely lucky to have signed a Saint Xavier Tiger. Congrats to the following athletes:

Clay Amlung – Golf – Cincinnati:  This past fall, Clay led the Tiger Golf team with a second place finish in the state tournament and helped capture the team’s 21st overall title.

Keefer Barnum – Swimming – Virginia: Barnum has helped lead the Tigers to three state championships, and most likely will extend that to four this upcoming season. Last year at the state meet, he broke the 100-yard breaststroke record and helped break the state record in the 200 medley relay as well. Barnum was ranked the No. 42 overall recruit in the Class of 2017.

Zach Hendrickson – Volleyball – Brigham Young: Hendrickson has been a force for the Tiger Volleyball team since he first came to St.X. Playing Libero, he has helped lead the Tigers to three consecutive state titles. Zach was also selected to the 2016 USA Youth National Team and will bring his talents to national powerhouse BYU.

Drew Singerman – Tennis – Furman: Singerman most recently won the individual state title this past spring, leading the charge for Tiger Tennis’ 8th consecutive title. Singerman is a five-star recruit, rated 1st in Kentucky, and 76th in the nation.

Sam Hedges – Baseball – Northern Kentucky: Hedges switched between designated hitter and outfield for the state champion Tiger Baseball team this past spring. He led the team in stolen bases last year, and looks to help lead the defending champions to a back-to-back title.

Connor Holden – Baseball – Murray State: Holden, who did not make the baseball team his freshman year, is probably the biggest success story over the past few years. After the team’s top two pitchers were ruled ineligible to play in the state title game last year, Holden was called to step up. He delivered a 1-0 shutout and led the Tigers to their 7th overall championship.

Sam Mudd – Baseball – Southern Indiana: To round out the commitments from the Tiger Baseball team, Mudd has committed to DII powerhouse Southern Indiana. Sam also started in the outfield for the Tigers, but is best known for his walk-off homerun to send the Tigers into the semi-finals of the state tournament.

Posted on November 9, 2016, in WSTX Sports. Bookmark the permalink. Leave a comment.