← CJ Features the Tigers’ Featured Back
We Want The Shillelagh! →

Justin Thomas named a candidate for Web.com Tour Player of the Year 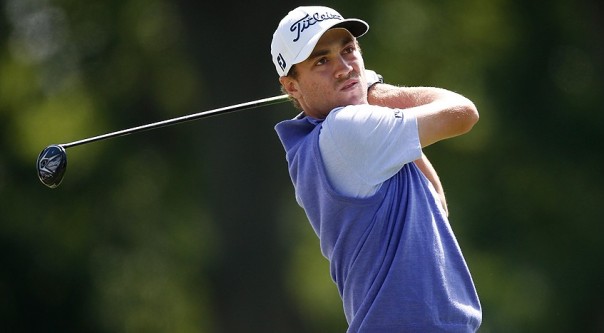 The 2014 Web.com Tour Player of the Year will be announced during the week of the Frys.com Open. On the ballot are: Derek Fathauer, Adam Hadwin, Carlos Ortiz, Andrew Putnam and our very own Justin Thomas.  We all know who we would vote for if we were given the opportunity, but unfortunately that’s for someone else to decide.

There is no question that Justin made a major case to be associated with this category.  He will be on the PGA tour starting next year and it would be great if he could end his time on the Web.com Tour as the best player.

Here’s his bio for being a candidate for Web.com Tour Player of the Year from the PGA:

The former collegiate standout at the University of Alabama announced himself quickly in his first full Web.com Tour season, finishing in the top 15 in his first five starts of 2014. Thomas continued the steady play throughout the season, ultimately recording 13 top-25 finishes in 20 starts. His elusive first victory came at the Nationwide Children’s Hospital Championship, the third leg of the Finals, when he made birdie on the first playoff hole to defeat Richard Sterne. The Louisville, Kentucky, native finished fifth on the Regular Season money list and third on the combined Regular Season and Finals money list. He was first in all-around ranking on the Web.com Tour in 2014 – first in birdie average, fifth in driving distance, 11th in putting average and 17th in greens in regulation. Aside from his win in Columbus, Ohio, Thomas’ next-best finishes of the season came at the El Bosque Mexico Championship (runner-up), Albertsons Boise Open presented by Kraft Nabisco (third), and United Leasing Championship Presented by PTI (T4). Thomas also played seven events on TOUR in 2013-14, highlighted by a T10 finish at the Farmers Insurance Open in January.

Posted on October 1, 2014, in Former Tigers and tagged Web.com Tour Player of the Year. Bookmark the permalink. Leave a comment.

← CJ Features the Tigers’ Featured Back
We Want The Shillelagh! →