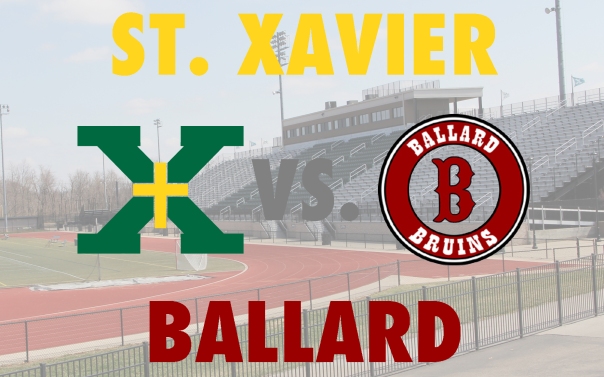 The season is upon us and we could not be more stoked.  A familiar foe will enter Br. Thomas More Stadium tomorrow and will pose a great test for the inexperienced Tigers.  With only three of our starters returning to St. X to begin this season, not many players for this year’s team saw the Bruins in week one of 2013.  Ballard has done some reloading of its own and has totally changed their offense according to the Courier-Journal from the spread to the wing-T.

A lot of first game jitters will surely be in effect, so whichever team gets over those faster will win the game most likely.  Ballard is known for their storied basketball tradition, but not so much on the gridiron.   Nonetheless they pose a threat right out of the gates of the 2014 season, so everybody hold on tight because it could be a bumpy road to victory.

361 days ago, these two teams met at St. Xavier to ring in the 2013 season with the Tigers coming out on top 32-14.  The score does not show how close the game was though.  The score was 2-0 at halftime in favor of the Bruins if you can remember that far back… yes TWO points to zero.  That lone score was by the way of a safety given up by St. X, but in the second half, the butterflies went away for the Tigers as they went on to outscore their opponents by 20 in the second half.

Since this group of juniors were born, St. Xavier has not lost to Ballard in football.  The two schools have played seven times and not once has the Bruins beaten the Tigers, even they came within one point in the regular season of 2010.

Will Wolford (St. Xavier 1977-1981) – Lettered four years in both football and basketball, as well as three years in track. After high school, he accepted an athletic scholarship to Vanderbilt University where he graduated in 1987. A four-year starter for the Commodores, he was a unanimous First Team All-SEC pick after his senior season, and the first-round pick of the Buffalo Bills in the 1986 NFL draft. During his 13-year NFL career, Will played with the Buffalo Bills, Indianapolis Colts, and the Pittsburgh Steelers. He started in three Super Bowls and three Pro Bowls and was on the cover of Sports Illustrated in September of 1994.

Devante Parker (Ballard 2006-2010) – Played for current Ballard Head Coach Mike Jackson during his playing days as a Bruin.  He was one of the most electrifying players in the state and rated the 26th-best wide receiver by Scout.com, ranked the 77th-best wide receiver by Rivals.com and the fifth-best player in the Rivals.com Kentucky postseason top 10.  He finished his career as one of the state’s all-time leading wide receivers, two-time All-State performer who caught 68 passes for 1,793 yards – 26.4 yards a catch – and 19 touchdowns as a senior.  He was named first team All-State by the Courier-Journal.  His high school football career was ended when he and the Bruins were knocked out of the 2010 playoffs by the St. Xavier Tigers.

With the realignment of districts going into effect next season, we may not see the Bruins on our schedule for a couple of years and they are probably glad about that.  There is always the possibility of seeing them in the 6A playoffs, but that is an unknown as of now as to how deep into the tournament it would be.  Let’s look at this as maybe being the last time we see Ballard on the football field for a while and go out with a bang and a WIN.

Posted on August 21, 2014, in Tiger Football and tagged The Ballard Game. Bookmark the permalink. Leave a comment.