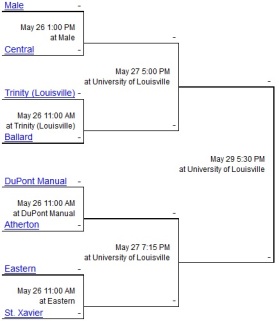 The St. Xavier Tigers will face the 7th Region’s best record team, the Eastern Eagles, in the 2014 KHSAA 7th Region Quartferfinals today at 11:00 AM at Eastern.  The two teams met earlier this season on April 8th, when the Tigers won 5-3 at Eastern as well.  The Eagles won their district, so they host the Tigers today on Memorial Day.  The winner will face either Manual or Atherton tomorrow at the University of Louisville’s Jim Patterson Stadium at 7:15 PM.

Posted on May 26, 2014, in Tiger Baseball and tagged 7th Region Tournament Quarterfinal, The Eastern Game. Bookmark the permalink. Leave a comment.